By far, the most misunderstood and thorny topic in the event of separation is spousal support. The notion that one would have to financially support the ex-spouse after separation, is one of the toughest sells in Family Law to a client, in particular in high-conflict situations.

When spouses separate, usually the desire to put a final end to the battle and move on with their lives, separate and apart, ranks high on their priorities. Against that light, having to pay spousal support is seen not just as insult to injury, but as the inability to untie the knot, making achieving finality but just a dream pipe down a long road.

WHO DECIDES?
Unless the parties consent, which is usually strongly resisted, a court of competent jurisdiction may make an order requiring a spouse to pay a lump sum (one payment) or monthly sums. The court has discretion in deciding what amount is reasonable, which makes it difficult to calculate with precision. On the other hand, there is criteria that has developed over the years that the court can’t ignore when it assesses how much and for how long this amount will be paid.

UNDERLYING THE NOTION IS THAT EVERY SPOUSE HAS AN OBLIGATION:

WHO IS A SPOUSE
Under the Divorce Act, spouse means either of two persons who are married to each other.
Under the Family law act, it includes parties who are not married but have lived together:
(a) continuously for a period of not less than three years, or
(b) in a relationship of some permanence if they are the parents of a child.
This means that if you are not married and your relationship breaks before three (3) years you could be entitled to spousal support if there are children of the relationship.

FACTORS THE COURTS TAKE INTO ACCOUNT
(a) the length of time the spouses have lived together.
(b) the role each assumed during the period of time they lived together; and
(c) any order, agreement, or arrangement between the parties that include spousal support.

DOES IT MATTER WHO IS AT FAULT
No. The law is clear that in making an order…… the court shall not take into consideration any misconduct of a spouse in relation to the marriage. This means for example that if the party that is entitled to support is the same one who was engaged in an affair during the relationship, this affair in itself does not take that right away.

THE OBJECTIVES OF SPOUSAL SUPPORT ARE TO:
Spousal support seeks to recognize the contributions both parties made to the relationship based on the following considerations, by all means not exhaustive, in the analysis of support:
 Standard of Living during the marriage
 Loss of earning capacity during marriage continuing after the dissolution
 Child care and impact on earning capacity
 Career advancement and stagnation of the other
 Investment in the career advancement of the other to his/her detriment
 Promote the economic self-sufficiency of each spouse, in so far as practicable

Spousal support is a legal right that has developed over many years of court decisions and amendments to legislation. It responds to the times in extending it for example to same-sex marriages/couples.

Understanding this right makes a difference between ending up destitute after years of marriage or attaining a standard of living after separation that is equivalent or as close as possible to the one enjoyed when you were married.

She is a Registered Psychotherapist, Member of the College of Psychotherapist of Ontario CRPO and the Association of Psychotherapists OACCPP. She holds a Degree in Psychology from Colombia, place where she was born. Sandra through her career has been involved in several non-profits organizations as a volunteer; Supporting newcomers, elderly population and abuse women. She is owner of her own office “Sandra Riano Counselling and Life Coaching Services”

In 2013 she stablished the first group of professional women that, months after will be called Hispanic Women’s Network -HWN.

Sandra has participated in numerous events as a Guest Speaker and Workshop facilitator presenting topics of Mental Health, Professional Development, and Parenting. She was recognized as “One of the Empowerment Women of 2017” by The Canadian Hispanic Congress.

Martha is a reporter, researcher, writer, producer and host fair with accurate stories for Television and Radio running with great exit in Canada. She develops and maintain contacts with community, political leaders and activists, key figures, Publicists, Martha is also the Owner/Director of MP Communications, company oriented to impulse journalistic programs, research, marketing social media development, and personal image. She is recognized in the community for her large experience and knowledge in Media and has been the official host of the bigger and popular “Latin Mississauga Festival“, that congregated more than forty thousand people per year.

She is a partner in a prestigious Law firm in the city of Toronto. She obtained her law degree from the University of Western Ontario and has practiced law for twenty years; focuses her practice in the areas of Family Law and Estates Litigation in the Greater Toronto Area, the City of Newmarket and the Peel, Halton, and Niagara regions negotiating agreements or representing clients before the Ontario courts.

Claudia is a member of the Law Society of Ontario and the Canadian Hispanic Bar Association. An active member in the community as a volunteer in non-profit organizations and she has been invited as a guest speaker in numerous seminars and conferences.

She is a dedicated Advisor , proudly born in Colombian . She holds a Degree in Hotel and Tourism Management and Business Administrator designation.

She was the 1st women to lead a Hispanics team in a very large group of Dealership in Ontario. She was nominated as entrepreneur of the year by the “Hispanics Chambers of Commerce” in 2012. Carmenza is recognized in the Community for her large experience and commitment with her clients, caring from the small to the big details to guide them with the best information and service.

She was born in Colombia and raised in Venezuela. She obtained her Medical Degree at the Central University of Venezuela, and later went on to her post grade degree of Ophthalmology She immigrated to Canada with her husband and two daughters in 2008 and then she enrolled in the international Optometric Bridging Program (IOBP) where she achieved her license to practice optometry in Canada.

Monica and her husband Optometrist as well, opened IGO Optical ten years ago, since then they have expanded their business around the GTA, Ontario.

She is a very passionate professional not only about the well-being of her patients’ eyes, but also ensuring that they experience a well-rounded and informative exam.

Angelica has an International Business Degree from Colombia. She has perfectly combined this background with a Medical Aesthetician program from Canada, to successfully build and manage “Aquamarina Beauty Spa” for 8 years. She is an active member of several entrepreneurs networking groups. Angelica is well known for her proactive work as a volunteer and supporter for the Hispanic Community.

She has born in Mexico. Karla is a Mortgage Agent at Lending Logic. She studied Finances, and became a Financial Advisor. Karla got 3rd place in Nationally Mortgages at retail level in her previous job. After a year in her current role, she has award with the title of Top Producer. She joins non-profits organizations as a volunteer –mentor for New Latin Immigrants who just arrived to Toronto. 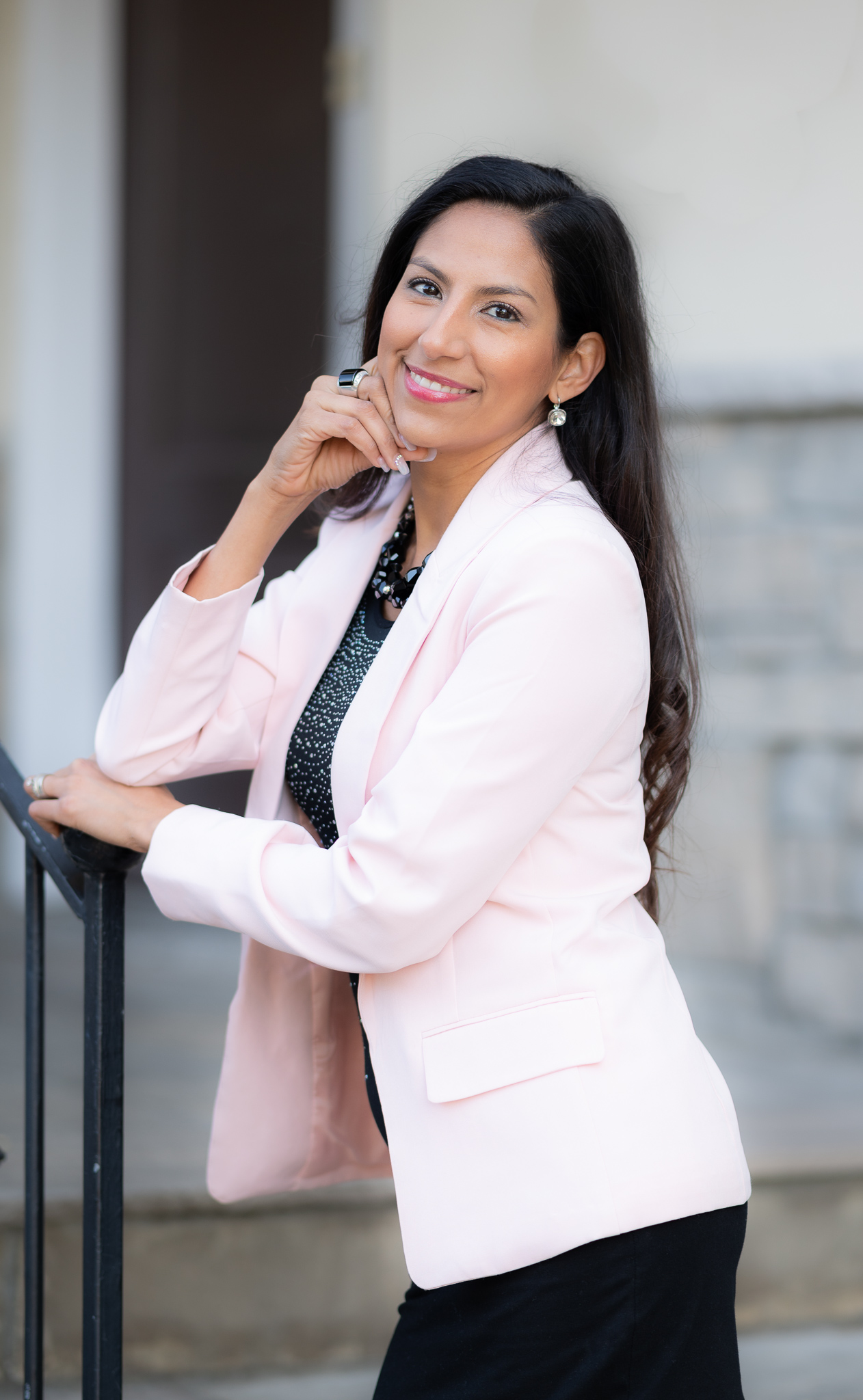 Graduated with honors from Iberoamerican University in Mexico city with a Bachelor Degree in Graphic Design and Fine Arts, has helped and expanded entrepreneurs and micro businesses to the development of their business in different areas that include: branding, corporate image, web development, social media, event planning and support to achieve their next higher level and maximum potential.
The doors of her studio are open to help business in their promotional needs, and printing of tools that will help their growth. She has over 14 years of experience in the Direct Sales and Multilevel Marketing industry that have brought her the opportunity to create a platform to design sales strategies and growth to entrepreneurs of this industry. She has helped thousands of entrepreneurs around the world to achieve their maximum
potential trough these strategies. Her career success is aligned to her passion and commitment towards projects that come her way. Daniela donates her, time, skills and resources to different charities, community groups and organizations that helps young entrepreneurs achieve their dreams. She is also a member of the Hispanic Women’s Network.